Check this video out! 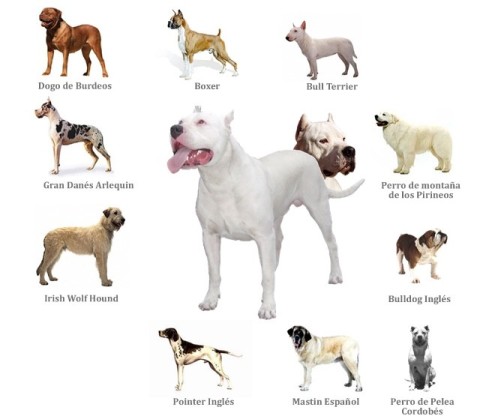 History of the Dogo Argentino

In the capital city of Córdoba, Argentina, on November 18, 1908, was born one of the most well-known medical surgeons in South America, but his name was in fact known and famous for his great work: "The Dogo Argentino."This incredible breed outlines and defines a group of passions but it mainly reflects its creator's live image: Dr. Antonio Nores Martínez.

As a great lover of the cinophilia and hunting, a traditionalist man, and above all a great scientist, he lived with a great interest: to be able to summarize and to concentrate on one breed a group of virtues that were captured in many different and incredible dogs.

Much of his work was in writing but another part went with him as he was murdered in the prime of life, even though he died as he has always wanted: hunting in the mountains.It is for that reason that his work has such a scientific quality that deserved numerous publications of big scientists and geneticists of that time where it was not possible to understand how a young breed of dogs had acquired such a genetic stability in a short period of time.

The ideal dog that Antonio was looking for and he was able to find was a dog of an extreme quietness, with great courage and endurance and mainly that it was able to give the life for his master.In the year 1928 he had already had a great part of his work done and with the course of years he himself presented the Dogo as a breed in 1947 in the province of San Luis by confronting one of his Dogos "Aña" with a pig and a puma.

This was performed with different families to avoid the consanguinity and to be able to eliminate most of the atavistic characters and to establish what he considered necessary.In the creation of the Dogo he added big qualities of different breeds that were used traditionally for dog fighting, as the old Argentinian fighting dog, the Bull Dog, the Bull Terrier and others of great work capacity as the Great Pyrinees Mastiff, the Boxer, the Great Dane, the Irish Wolf Hound, the Pointer...

Since the creator's death, the family has kept its consanguinity, but with a priority that we consider fundamental to any species’ life which is functional gymnastics.At his death, his brother Agustin Nores Martínez, took over the dream and continued working on the new breed that was recognized by the International Cinologic Federation.

The Dogo has reached any corner of the world and the person who has a Dogo in some moment of his life ends up dying with him as not any other breed has demonstrated the qualities of the Dogo Argentino whether as a companion and as a hunter.